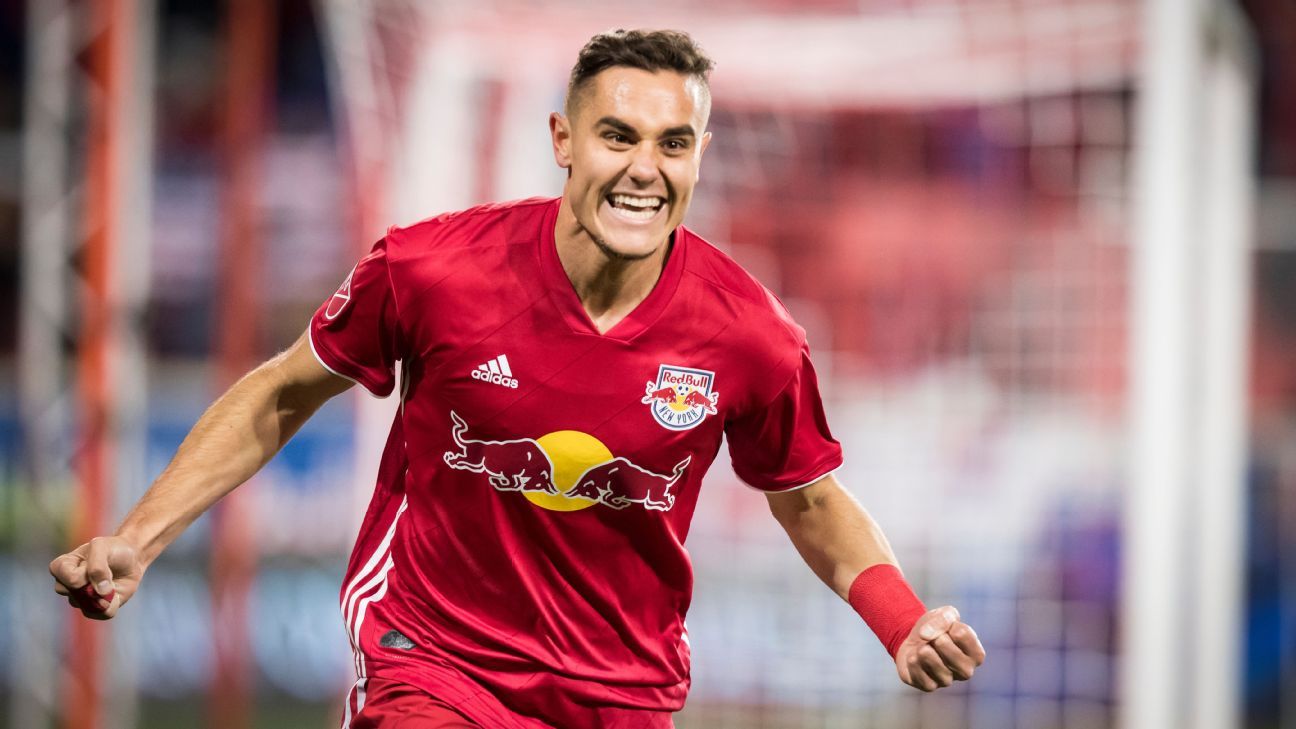 Muyl opens the scoring for the Red Bulls

Long opens the scoring for the Red Bulls

Gyasi Zardes found the back of the net once again at home for Columbus as Crew SC take a one-goal advantage into the return leg at Red Bull Arena.
Read More
ESPNFC.COM

Wayne Rooney says he is proud of DC United's efforts in this season's MLS, despite their play-off penalty shoot out loss to Columbus Crew.
Read More
ESPNFC.COM

MIKE KEEGAN: The former Everton and Man United man missed a spot-kick as his current side, DC United, crashed out of the play-offs on penalties to Columbus Crew on Thursday night.
Read More
DAILYMAIL.CO.UK

Why RBNY, NYCFC, and Crew SC will (and wonâ€™t) win MLS Cup The 33-year-old stepped up for his team's first spot kick after the match had ended 2-2 following extra time, but his shot was saved by Columbus Crew goalkeeper Zack Steffen
Read More
INDEPENDENT.CO.UK

Wayne Rooney's maiden MLS season with D.C. United came to a premature end as he missed a penalty in Thursday's shootout defeat to Columbus Crew in the first round of the play-offs.
Read More
SKYSPORTS.COM Wayne Rooney's fairytale first season in Major League Soccer ended in disappointment when the DC United striker missed a penalty in a shootout defeat to Columbus Crew in the knockout round of the play-offs on Thursday.
Read More
STANDARD.CO.UK

Wayne Rooney fails from the spot in a shootout as DC United are knocked out of the MLS play-offs by Columbus Crew.
Read More
BBC

WAYNE ROONEY suffered heartbreak as he missed a penalty in a shootout that saw his DC United side crash out of the MLS play-offs to Columbus Crew. The striker, 33, fluffed the pressure-packed opening spot kick, bringing his debut season in the US to a devastating end after he had single-handedly turned the club’s fortunes […]
Read More
THESUN.CO.UK

WAYNE Rooney was slammed after missing a penalty during DC United’s play-off bid. The striker, 33, fluffed a shootout’s opening spot kick, and his side went on to lose to Columbus Crew, ending his first MLS season in disappointment. The former Everton star gave a cock-sure stuttering run up but scuffed his effort to the […]
Read More
THESUN.CO.UK

A back-and-forth affair between D.C. United and Columbus saw Zack Steffen save the Crew in a penalty shootout to book their spot in the Eastern Conference semis.
Read More
ESPNFC.COM

DeLeon levels it with stunning volley for D.C. United

Higuain answers with tap-in for Columbus

Brillant puts his body on the line to give D.C. the lead

Brillant puts his body on the line to put D.C. ahead

MLS Review: LA Galaxy collapse to miss out on play-offs

With a 3-2 win over Minnesota, Columbus are officially back in the postseason for the fourth time in the last five years.
Read More
ESPNFC.COM